This spring, I met Lonnie Couk in Yosemite Valley at a memorial for a famous rock climber. He told me that his people — the Ahwahneechee — believe their ancestors still reside here. Lonnie even asks them for permission before he ascends cliffs like El Capitan. But some days Lonnie says he feels like his ancestors say, “No, not today.”.
CPR Link to Story

YosemiteLand is a new podcast from Capital Public Radio about how decisions made today in and around Yosemite National Park will impact millions of visitors in the years to come. It’s a region learning how to deal with a changing environment and increased tourism. As tourism increases in Yosemite, how is the park’s identity — its sense of place — changing?
Capital Public Radio Link to Story

This segment is part of The State of Science, a series featuring science stories from public radio stations across the United States. A version of this story, by Ezra David Romero, appeared on Capitol Public Radio. The fourth and fifth graders at Sage Ridge School in Reno fill their classroom with shouts of “ooh” and “ahh” as Meghan Collins teaches them how to take pictures of snowflakes with their phones.
Science Friday Link to Story

A fast-moving Northern California wildfire has forced tens of thousands of people to evacuate, with residents fleeing through flames and leaving their cars to take cover in nearby stores. The Camp Fire started Thursday morning near Paradise, a town of around 27,000 people some 90 miles north of Sacramento.
NPR Link to Story

'Here It Goes': Coming Out To Your Doctor In Rural America

And a poll conducted by NPR, the Robert Wood Johnson Foundation and the Harvard T.H. Chan School of Public Health finds that 18 percent of all LGBTQ Americans refrain from seeing a physician for fear of discrimination. One of those people is 20-year-old Alex Galvan. The moment right before he told his doctor earlier this year that he is gay and sexually active felt like a nightmare.
NPR Link to Story

that is, setting fires on purpose — are one way to try and keep wildfires in check. But there are challenges to doing a lot more of them. California's devastating fires are prompting calls for more aggressive forest management. One way to do that is through prescribed burns, meaning fires set on purpose.
NPR Link to Story

Yosemite Valley To Reopen After Closure Due To Fire and Smoke

If all goes as planned Yosemite Valley — the National Park's most popular tourist area — will re-open Tuesday after being closed for nearly three weeks due to poor air quality and fire danger. At the moment, there are no people on trails, or climbers on cliffs that line the valley. This weekend firefighters hope is to keep the fire out of Yosemite Valley, containing the blaze about three miles away.
NPR Link to Story

How A Skeptical Rancher, Aided By An Outdoors Brand, Turned Climate Friendly

Lani Estill's family ranches on thousands of acres in Modoc County on the border of Nevada and California. Her operation, Bare Ranch, sits in a place called Surprise Valley. It's a beautiful, almost forgotten place "Where the West still lives" — that's the county's motto. "We have things going on here that you just don't see going on everywhere in the nation," Estill says.
NPR Link to Story

Ken Yager fell in love with Yosemite as a 13-year-old when his dad pulled over and let him run to the base of the 3,000-foot monolith called El Capitan. When he touched it for the first time he said it felt like magic. "It was like sparks going into my hand," Yager said. "It was just really intense.
NPR Link to Story

This segment is part of The State of Science, a series featuring science stories from public radio stations across the United States. A version of this story, by Ezra David Romero, appeared on Capitol Public Radio’s Yosemiteland podcast. The article below originally appeared on NPR. People love seeing black bears when they visit Yosemite National Park in California.
Science Friday Link to Story

Frank Gehrke trudges through snow and ice, as he’s done for nearly four decades in the Sierra Nevada. He’s one of many state workers who takes monthly snow surveys, in the same spots, to figure out how much water is in the snowpack. And this old-fashioned way of measuring the snowpack is quite laborsome.
CPR Link to Story

The nation's first court hearing on the science of climate change will be held Wednesday in San Francisco. It’s the result of state lawsuits from the cities of San Francisco and Oakland, who argue that oil producers know they're responsible for rising ocean levels — as much as 10 feet by 2100. They also claim that, instead of doing something about it, the companies have tried to conjure up doubt around climate change science.
CPR Link to Story
View More Stories

Romero has worked with Valley Public Radio for about five years. He landed at KVPR after interning with Al Jazeera English during the 2012 presidential election. His series ‘Voices of the Drought’ using the hashtag #droughtvoices has garnered over 1 million impressions on Twitter, Tumblr and Instagram. It's also resulted in two photography exhibits and a touring pop-up gallery traveling across California. Stories affiliated with #droughtvoices have run locally, statewide and on national air. The series also was awarded a Golden Mike Award in 2015 by RTNA of Southern California for "Best Radio News Feature Series."

In 2016, he received won two Golden Mike Awards for best entertainment reporting and business reporting and consumer reporting. And in 2014 he was awarded two Golden Mike Awards through the RTNA of Southern California for a piece on budding tech in Central California and a story on Spanish theater. Valley Edition, the show Romero produces, was named for the best Public Affairs Program for 2013 by the RTNDA of Northern California.

He’s a graduate of California State University Fresno, where he studied journalism (digital media) and geography. He has worked for the Fresno Bee covering police, elections, government and higher education. In 2012 he was a Gruner Award finalist for his 13-part Sanger Herald series on obesity in Sanger, Calif. 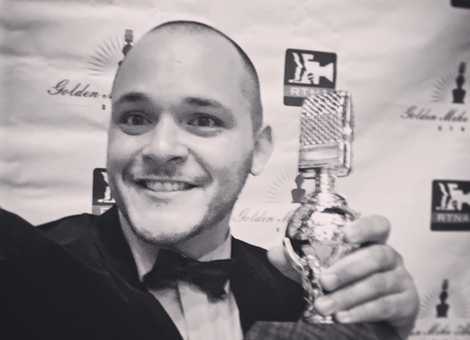